Diver Down :: As performed by The Atomic Punks 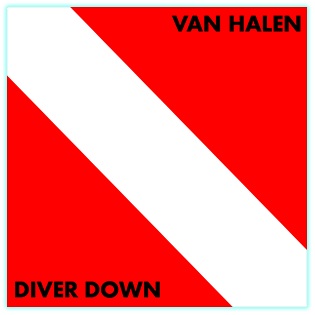 For the flag, see Diver down flag.

Diver Down is the fifth studio album by American hard rock band Van Halen, released in 1982. It spent 65 weeks on the album chart in the United States and had, by 1998, sold four million copies in the US.

The album cover artwork displays the “diver down” flag used in many US jurisdictions (which indicates a SCUBA diver is currently submerged in the area).[1] Asked about the cover in a 1982 interview with Sylvie Simmons (Sounds, June 23, 1982), David Lee Roth said it was meant to imply that “there was something going on that’s not apparent to your eyes. You put up the red flag with the white slash. Well, a lot of people approach Van Halen as sort of the abyss. It means, it’s not immediately apparent to your eyes what is going on underneath the surface.” The back cover of the album features a photo by Richard Aaron of Van Halen on stage at the Tangerine Bowl in Orlando, Florida that was taken on October 24, 1981 as they concluded a set opening for The Rolling Stones.